My Christmas holidays in Italy with family and relatives, December 2009.

We landed in Rome, Ciampino airport, safe and sound at 10:30 GMT on a sunny Wednesday, the 23rd December. Myself, my husband, my two teenage children, my  twelve year old son and Valentina, my autistic daughter.

It was so warm we took off our heavy coats and scarves and realized a T-shirt was all we needed. We had caught the flight from Liverpool at the last minute, delayed because the red and golden candles I had bought for the great-grandmothers had a ‘strange shape’ under the scanner. (Mind you never travel with candles in busy times).

Dark green maritime pine trees against a pale blue sky welcomed us outside the airport while we were waiting for my father-in-law to pick us up. A mild breeze ruffled my short dark hair. What season was it? I felt confused. A silver Fiat Punto was parked near us. The windows were down, the radio at full blast, the driver was singing along at the top of his voice, “I wanna beat you”. He got out, turned his back on us and looked towards the exit of the airport, waiting for someone. He wore violet sunglasses and an emerald long sleeve polo-shirt. With a swift motion he pulled his jeans down and his underpants up. I had a sudden thought: he must have had a cheerful chubby mum waiting for him at home with steaming plates of spaghetti with tomato sauce sprinkled with parmigiano ready on the kitchen table. For him, and for his friends of course. 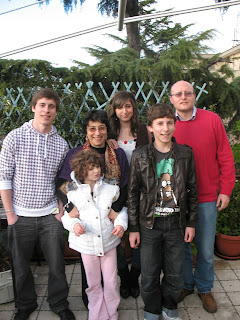 Just like my mother-in-law waiting for us at home. For lunch: homemade fettuccine with ragù, beefsteak and chips, salad, seasonal fruit and a delicious crostata (a sort of jam tart) for dessert. We hadn’t had time for breakfast so we didn't leave a single crumb, though the news on TV was full of warnings about Christmas foods. Marron glacé with cockroaches, torrone and panettone made in factories and sold as home-produced at thirty euros per kilo, and  doughnuts fried in liquid paraffin. I have always thought that sealed supermarket food with the expiry date clearly printed on the label is the safest.

Living in England we had got out of the habit of watching Silvio Berlusconi on TV every day, even more than once a day. Especially after a dramatic event that happened  before Christmas. Some crazy bloke threw him an iron miniature of the cathedral of Milan and hit him on the face, breaking two teeth. The Italian Prime Minister had forgiven him with a heart-breaking speech.

Pope Benedictus XVI was often on the news as well. On Christmas Eve, at Midnight Mass in St Peter’s while he was walking along the aisle, an over-zealous woman in a red coat jumped over the fence to hug him. It was very enthusiastic of her but quite alarming for the Security. The bodyguards grabbed her and they all fell on the floor like puppets. They showed the scene again and again on the news:- red coat jumping and hugging; the Pope down. Luckily His Holiness was fine. Only a cardinal got hurt in the fall, breaking his thigh-bone, the cardinal Etchegaray, one of my favourite, God bless him.

We had our little accident at home as well. Valentina gave a shove to my frail little mum, who will be eighty in May. No broken bones but she banged her head against a door.  A bit of rest and a bag of ice saved the day. Phew.

Between meals we  played cards and Tombola together. My eldest son was obsessed with beating his dad and granddad at Scopone, Briscola and Gin Rummy. They let him win from time to time and he learned a lot of new tricks.

My teenage daughter had a fierce competition with her little brother at Tombola. Both wanted to win at any cost. I had to draw the numbers from a plastic bag while my daughter was shaking my arm in an attempt to make me choose the ‘right’ number. She said it worked. My son instead threw his dad’s scorecards to the other side of the room every time my husband was on the point of calling “Tombola!” to win the final prize. Needless to say we did nothing and they won most of the time.

But I also had some leisure time. Nightclubs? Frenetic shopping? Hard-core films? No. Art Expositions. Modern and contemporary art to be precise. I knew I couldn’t miss ‘Surrealism and Dada’ at Vittoriano in Piazza Venezia and ‘Caravaggio-Bacon’ at Galleria Borghese. After long hard negotiations with my husband and children I managed to arrange a visit to the Vittoriano exposition with the whole family and some friends as well. But only my parents would accompany me to Galleria Borghese.

‘Surrealism and Dada’ had an extraordinary display of drawings, sculptures (sort of) and paintings from great artists like Picasso, Mirò, Magritte and Hans Arp to less famous ones. Valentina was so impressed she started to scream and spin around. Luigi decided to avoid such masterpieces (admittedly he found them pointless) and went out with her before she could change the characteristics of a Mirò with a  chance blow. The security guards escorted them to a safe distance.

In Piazza Venezia the seventy-foot Christmas tree was outstanding, with droplets of blue lights falling from the branches and covered with golden sparkling tinsels from top to bottom.

Francis Bacon’s huge triptychs and disassembled portraits among XVIII century frescoes were face to face with Caravaggio’s masterpieces at Galleria Borghese. I was mesmerized once more. I had never realized before how much the two artists had in common in their quest for truth and reality, their superb drawing skills and their similar lives, from Caravaggio's powerful contrasts and vivid details to the last scream and  inner sigh of ripped agony from Bacon.

A great experience. I had a well-deserved cup of hot and strong tea in a bar before going home.

Finally, the latest news about Italian families. Seventy per cent of Italian young people stay at home with mum and dad till they are nearly forty. No living with a partner, no marriage, no children, no commitment and no independence. Sometimes no job or low wages as well. In an interview on TV two of them said they were happy  to do so and got on very well with their parents. That’s why I saw only a few children around and no babies. I had a disturbing vision of the country shrinking. I could yet live to be one of the last few examples of Italiana Denominazione d'Origine Controllata  (Native Italian).