When my daughter came back from uni for Christmas holidays, I couldn’t wait to dash with her to the V&A with my new membership card plus guest.
The “Fabric of India” exhibition was the main aim of the day, but we ended up seeing the “Al Thani” collection first. It was all about priceless jewels, diamonds as big as peanuts, rubies as big as walnuts and emeralds like hazelnuts. Just the day before I’d toured the centre of my village and popped into the jewellery shop for the first time, the luscious rings and earrings had tiny precious stones and were already very expensive, but the gems from Al Thani collection were from another planet. The first piece, a turban jewel, had seventeen diamonds of the weight of 152.64 carats.
Most of the gems of the exhibition were from in India or in Sri Lanka. Their names quite revealing, sometimes disturbing: Idol’s eye, Mirror of Paradise, the Star of Golconda. There were also precious jade bowls, enamelling works and some spinel necklaces, their stones so big that made me think of pebbles collected on a shore, which they clearly were not.
Interestingly, with the British rule in the middle of the 19th century, the production of jewellery moved out of the palaces and entered the commercial world reaching Europe. Consequently they adapted their style to Western tastes. The Indian manner, to cut and polish the stone aimed to adapt and interpret the gem’s natural shape without changing it drastically, moved to the Western aesthetic of cutting gems into geometrically perfect forms. These angular, regular shapes, captured and refracted light, giving that astonishing, mesmerizing effect that makes gems so attractive, and, I daresay, hypnotizing.
Some photos of Indian aristocrats on display drew my attention: a baby in his father’s arms covered in pearl strings, women with heavy bangles, earrings and nose rings all reminded me of portraits of European queens and kings, with their clothes embroidered with pearls and precious stones. The essence of jewels is evidently linked to power.
The last section was dedicated to large stones carved with deities and inscriptions invoking God. It sounded weird as most, if not all religions preach frugality and charity.
Some of the videos were very interesting, showing how Indian craftsmen made an enamel brooch using traditional tools or how they cut an astounding gem from a rough stone that looked similar to an ordinary piece of rock.
The Fabric of India exhibition was pretty different. It made me realize how much fabrics have always been important in Indian production since ancient times. In Ancient Greece the name ‘India’ meant cotton and the word ‘indigo’ derives from the word India. And still today, India is undoubtedly part of the fabric global trade. Each region of the Indian subcontinent specialized in a particular fabric, e.g. golden silk of Assan, fine cotton of Bengal, red dyes of south-east India. The dyes were originally extracted from plants and roots, like pomegranates rinds, madder root, tinbura root, chay plant, and insects like the lac beetle. To fix the dye they used alum, a mordant, which reminded me of the war between Florence and Volterra under Lorenzo de’ Medici rule caused by Florence greedy aims on alum mines, precious for their fabric production.
India exported fabrics all over the known world, Mediterranean countries, Middle-East, Africa and Europe, then also Japan and the Americas. Interesting videos showed how they hand make wooden blocks to print patterns, how they weave using handlooms and the Ari embroidery technique made by men using hooked tools. Beautiful works that required great skills in craftsmanship.
At the end of the exhibition they explained how the British Empire tried to break this ancient tradition taking the monopoly of the fabric production, producing fabrics in Lancashire mills that were then sold in India. Unemployment spread and only very fine or very rough fabric production survived. From this it’s obvious why Gandhi wanted to inspire people to spin by showing them himself and insisted that everybody had to weave their own clothes. Significantly the spinning wheel is in the Indian flag to highlight the great importance of their fabric production. Today’s Indian fashion design takes into account traditional techniques like mirror work, hand weaving, natural dyes and chikan embroidery, elevating them to a new level using new materials and silhouettes.
A revealing day. 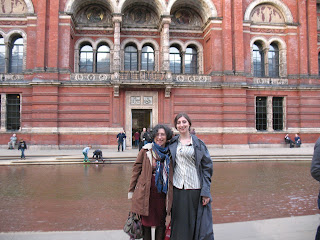 Posted by http://carlascarano.blogspot.co.uk/ at 12:14 No comments:

My husband and I decided to spoil ourselves this Christmas and give each other as a present a joint membership to the British museum and to the V&A. So just before the Christmas break we had a gorgeous day out at the British museum passing from one exhibition to the other and ending in the shop for some last minute Christmas shopping. 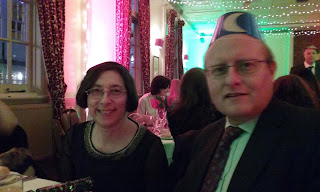 Celts, Art and Identity was engrossing. The stress of the exhibition was on the non-Mediterranean, independent and non-Roman identity of Celtic population (which is a very debatable point considering the fact that all we know about the Celts is from what Greeks and Romans wrote on them). It showed different beautiful artefacts testifying their mastery in metal work. The bracelets, torcs, shields and all the decorations for hilts and brooches were very original and unique. The figures of stylized plants, animals and people are a product of a dreamlike or idealized world rather than the study of reality. Their abstract sinuous shapes, interlaced lines that form complex knots and highly decorative patterns, are often described as abstract, a creation of the mind rather than a reproduction of facts. For this reason I find Celtic works inventive and extremely interesting, certainly communicating their mentality.
We know that they spread all over Europe and beyond but not as an organized group of people; they mixed with other populations, raided, sometimes settled and explored new lands, but never planned a proper conquest or an organized state-like structure similar to what the Mediterranean civilizations did, e.g. Egyptians, Greeks and Romans. We don’t know why this didn’t happen, possibly it was due to the harsh climatic conditions of central and northern Europe, notoriously colder than now, that didn’t allow much leisure as most part of the year it was mainly about basic survival. Or the fact that they were far from the areas where ancient civilizations started about six thousand years ago, Assyrian, Phoenician, Egyptian and Babylonian civilizations, in today’s troubled Middle East regions. On the other hand, Greeks and Romans were near to Egypt and the Middle East, they could trade with them and learn from them much more easily. Certainly it is difficult to dissert on philosophical matters or write astonishingly advanced tragedies like the Greeks did when you need to face long cold winters and food is scarce. With the Romans all the precious sophisticated knowledge that developed for thousands of years in the warm comfortable Mediterranean area spread all over Europe and mixed with whatever they encountered, and then mixed again with the German tribes when the Western Roman Empire collapsed. This crossing of different populations must have been hard, violent, sometimes ruthless, but this is how it was, and is, when people necessarily move, meet, clash, mix, creating who we are and will be.
The other compelling exhibition we visited was Egypt, Faith after the Pharaohs. I didn’t remember that Egypt (and the Middle East) was part of the Roman Empire, then Eastern Roman empire, from 30 BC till 7th century when the Arab armies conquered it, causing a large number of refugees. Jews, Christians and Muslims lived side by side in Egypt forming a rich melting pot society, their relationships were mostly peacefully with some tensions from time to time.
Before Muslim conquest, Alexandria was the capital and the language used by scholars was Greek while ordinary people spoke Coptic, which survived for four hundred years after the Islamic conquest. Ancient Egyptian, Jewish, Classical and Christian cultures merged leaving interesting objects like a statuette with the body of an ancient Roman emperor and the head of the Egyptian god Horus. The capital of the Byzantine Empire was Constantinople (the ancient Byzantium, today’s Istanbul) where, similarly to other parts of Europe, religion changed from the worship of many gods to one God.
On that same day we also visited another exhibition: Drawing in Silver and Gold, from Leonardo to Jasper Johns. It was close to room 90, Prints and Drawings, which I had never seen before. The exquisite drawings exhibited were made with a metal point (stick or sort of pencil), which could be gold and copper or silver and copper, on a prepared paper. They look like pencil drawings but the background is different and the tricky bit is that they can’t be erased. In this way the artists could affirm and prove their mastery of drawing techniques. The paper was prepared with some powder (e.g. bone ash) mixed with animal glue. This was brushed on the paper, sometimes mixed with a pigment (e.g. blue, pink, sienna )and once dry, it was marked with the stylus.
One of the best pieces of the exhibition is Leonardo da Vinci’s Bust of a Warrior, it shows all his skills and mastery of the demanding technique, which was very popular in Italy and the Netherlands during the Renaissance. Afterwards there was a revival in 19th century in Germany and in England. The last works of the exhibition are interesting pieces by Otto Dix, Bruce Nauman and Jasper Johns. The Untitled 1984 by Jasper Johns features plumbing fixtures with a jubilee vase in the middle outlined by the profiles of Elizabeth II and Prince Philip, on the background engravings of a whale, probably a reference to Moby Dick.
Definitely an intriguing technique I will try as soon as I can find a stylus and the right kind of paper.

Posted by http://carlascarano.blogspot.co.uk/ at 11:01 No comments: