I spent one day in Naples with my husband, my parents in law and one of my boys. The trip is only one hour by train from Rome, very comfortable with Frecciarossa and Italo. It was a warm sunny day; Naples’ recently renovated railway station is modern, clean and welcoming, included the toilets, though a bit expensive (€ 1). The underground was spotless and looked new as well. The National Archaeological Museum was efficiently organised, though I found the captions a bit cryptic sometimes.

Visiting Naples was riveting and fascinating. The city has so many faces, all interesting, revealing cultural, artistic and social diversity that have been layered throughout centuries, as Pino Daniele brilliantly sings: https://lyricstranslate.com/en/napule-%C3%A8-naples.html. This is well explained in the Museum with artefacts that date from the 4th century BC. Unique Attic black amphorae illustrating Greek myths, helmets and gold jewels from Magna Graecia time were on display as well as Roman statues, some of them copies of Greek originals. There were statues and bronzes rescued from the sea near the blue grotto of Anacapri and at Punta Licosa. At the entrance hall a beautiful Neapolitan Presepe welcomes the visitor. It is circular showing the activities and products of the region with the nativity on top. The Presepe in Neapolitan tradition not only represents the nativity, it reveals an identity that mingles culture, art, religion, agricultural production and food of the region. It is an artistic expression appreciated by all social classes from aristocracy to ordinary people. 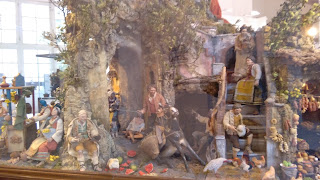 One of the most interesting pieces was Atlante Farnese, a copy from a Greek original, who holds the earth on his back, one of the most ancient representations of the earth and sky with the constellations in relief. Among statues of Venus Kallipygos or Callypige, Hera, Ercules and busts of emperors there was the exhibition of contemporary sculptures in metal work by Riccardo Dalisi. He is an artist born in Potenza in 1931 who worked both at the Faculty of Architecture at the University of Naples and with young people at the rough Rione Sanitá in Naples. His approach aims to establish a dialogue between design, sculpture, craftmanship and painting. It is a very creative work, surprising, unconventional, commenting in an ironic way to the apparently serious Roman statues. It offers a captivating comparison with the past and a possible reflection to the viewer between past and present. 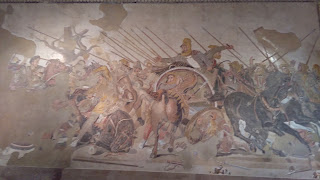 The museum also displays Roman paintings that reveal an incredible modernity in the movement of the figures, draping and the use of perspective. The legacy of still life paintings from 17th century on to Roman paintings is clear, though the arrangement of the objects is still embryonic in the ancient works. Mosaics from the Casa del Fauno in Pompei and the famous ‘Battle of Alexander’ (2nd century BC) were on display as well. This is another clear source of inspiration for many paintings of battles, such as Paolo Uccello’s battles, just to give an example. They are impressive unique works I was happy I could admire.

After the museum we had lunch at Lombardi pizzeria with a delicious pizza margherita and fantastic desserts: babá (rum baba), cassata siciliana and a special cassata covered with dark chocolate. They were extraordinarily delicious. I also bought some Neapolitan sfogliatelle and cannoli for my mum at pasticceria Rescigno, then we entered Naples’ old alleys to reach Chapel San Severo and Pio Monte della Misericordia. 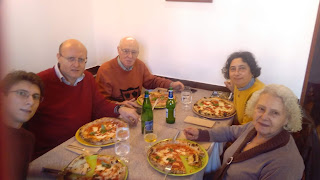 Walking through the ancient alleys I could glimpse what Naples is. Cobbled streets not exactly clean, with heaps of rubbish here and there and occasional cigarette butts or cans. Some buildings are dilapidated and laundry is hanging from windows and balconies. There are graffiti everywhere,
scratched facades then suddenly a medieval tower, a baroque church, the statue of a saint on a Roman pillar looking at the sky, or the entrance to the exhibition of Andy Warhol. The streets were crowded with shops and stalls selling pizza a portafoglio (‘wallet’ pizza), garlic and pepperoncino and dried tomatoes, fish, roasted chestnuts, mostaccioli and scaccia guai (talismans). It was enthralling; a sense of authentic carelessness, spontaneity and diversity that impressed me. I think that there isn’t any other place like Naples in Italy, and I hope it will be maintained as it is without renovating the buildings or tidying up the streets. People are very warm; you can start chatting with everybody not just about the weather but on any subject you have in mind. I loved it.

We also visited the Chapel San Severo and admired the masterpiece of the famous Veiled Christ (1753) by Giuseppe Sanmartino, a marble sculpture representing a reclined Christ giving the illusion that the body is covered with tissue. It is an impressive work both in its conception and rendering where the sense of decomposition suggested by the abandonment of the head and the folding and wrinkles of the veil contrast with the roundness of the shoulders and legs.

The ‘Sette Opere della Misericordia’ (the seven works of mercy) by Caravaggio is located at Pio Monte della Misericordia, a Catholic Charity institution founded in 1602, with a Baroque church. In the painting the movement created by the different figures representing the seven works of mercy is unique. They gather in the painting in the form of naked bodies and draped ones exposing their naturalness and ordinariness under the vigil eyes of the two angels embracing each other and hovering from above. It is a revolutionary piece denoting originality in the composition and outstanding skills.

Around the church there was a display of interesting sculptures by the Belgian artist Jan Fabre made with coral dust in forms of crosses interweaving with flowers, hearts according to Catholic iconography. The coral was donated by Neapolitan producers and the artworks now belong to Pio Monte della Misericordia.

I loved visiting Naples but there was no time to see everything, so I hope we will have a chance to go back maybe stay a few days. Back to Rome, I visited the exhibition Bacon and Freud: the School of London at Chiostro del Bramante near piazza Navona. It was very interesting with works from the Tate Britain and explanatory captions. There were a good number of works by Francis Bacon and Lucian Freud and a few paintings by Frank Auerbach, Leon Kossoff, Paula Rego and Michael Andrews. I reviewed the exhibition here for London Grip:

At the bookshop there were intriguing phrases printed on tote bags and purses, such as ‘In Art we Trust’, ‘All I need is Love and WIFI’, ‘Tell the truth and run’, ‘I love dogs and some people’, ‘I am not crazy I am creative’ or ‘I’m a woman, what’s your secret power’. After the exhibition I had dinner with my mum and my friend Ornella who is a fantastic cook. She prepared spaghetti alla bottarga, the recipe will be in my next post. 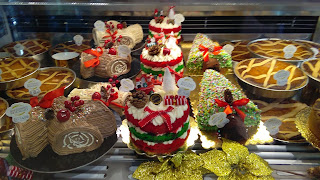