I tried these cakes with my mum and my daughter last Christmas. They are tremendously energising, perfect for winter time when I always feel the physical need to eat chocolate and other rich things.

Black and white donut cake
This is composed of two cakes with rich textures blended together, to make a typical winter treat. I didn’t have a ring-shaped tin so I used a 23 cm cake tin with a glass in the middle to make the hole.
For the white cake you need: 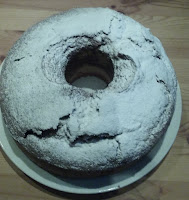 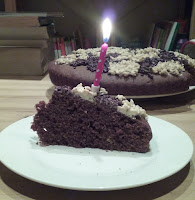 Beat the butter soft and add the yolks of the eggs and sugar. Melt the dark chocolate and stir it in, then add the ground hazelnuts and half of the flour. Combine the baking powder and the bicarbonate of soda with the milk and pour in the mixture. Finally whip the egg whites until stiff and combine them to the mixture together with the rest of the flour, mix well till smooth. Pour into a round greased tin and bake for half an hour to forty five minutes at 180°C (check bake by poking it with a skewer until it comes out clean). Melt the white and dark chocolate in separate pans and mix the chopped hazelnut half in one and half in the other. When the cake is cool spread the white and dark chocolate in patches or patterns on the top. Chill before serving to let the top set.

Apple Strudel
This is a classical recipe of a traditional Austrian pudding very popular in Italy as well, especially in northern Italy near the Austrian border. The dough is simple while the exquisite flavour is concentrated in the filling made of apples and dried fruit.
For the dough you need:
350 g of flour, 2 tbsp of olive oil, 2 eggs, 150 ml of lukewarm water, a pinch of salt.
For the filling you need:
800 g of Golden Delicious apples, 2 tsp of ground cinnamon, the grated zest and the juice of a lemon, 100 g of breadcrumbs, 50 g of pine nuts, 2 tbsp of liquor, 50 g of raisins, 100 g of sugar.
For the finish: 100 g of melted butter and icing sugar to dust. 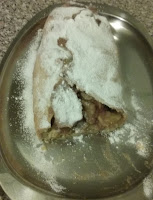 Mix all the ingredients for the dough in a bowl, knead it for five minutes and let it rest for half an hour in a bowl covered with a tea towel.
Prepare the filling by first peeling and coring the apples, cutting them in pieces and then adding the zest and juice of the lemon. Add the rest of the ingredients, mix well and let it rest for a while.
Roll out the dough in the shape of a rectangle, spread half of the butter on the dough and pour the apple mixture in the middle of it. Roll up the sides of the pastry to wrap the filling and seal it. Brush the rest of the melted butter on top and bake  for 45 minutes at 180 °C.
When cool, dust with icing sugar. 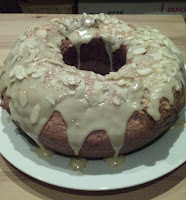 Beat the yolk of the eggs with the sugar in a large bowl till mixture becomes pale. Add the ground almonds, the sunflower oil, the ground white chocolate and some vanilla drops. Combine the baking powder and the bicarbonate of soda with the milk and pour this in the mixture. Finally add the flour and the whipped egg whites (whipped till stiff). Bake for half an hour to forty five minutes at 180°C until a skewer comes out clean. When cool, melt a 100 g of white chocolate in a pan with a tbsp of milk and pour it on top of the cake, then sprinkle some flaked almonds.

Posted by http://carlascarano.blogspot.co.uk/ at 03:50 No comments:

I was in Rome for two weeks during my Christmas holidays. The weather was cold but sunny most of the time. We spent the Christmas and new year’s days at home or family gatherings, eating big meals and playing cards. The food was gorgeous, the usual homemade gnocchi, lasagne, ravioli, fettuccine, and delicious torrone and panettone made in a local bakery where we bought a lot of products to bring back home. They had a nativity made of bread and biscuits filled with Nutella in the shape of a Christmas tree, then mostaccioli, ciambelle al vino (donuts with wine) and other mouth watering food. 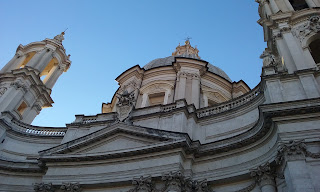 We also played a new game one of my sons introduced to us. It is called Coup Rebellion G54 and it is basically about killing each other through lying. Each player has two lives and can collect tokens from the Treasury to spend to target and eliminate the other players. To make it more exciting, each player has two cards (which symbolize their lives) that allow them to impersonate the characters described in the cards as well as carrying out special skills. For example, if you have a banker card you can take three tokens from the Treasury instead of one each turn, and as the other players can’t see your cards, you can pretend to have a banker card. If nobody challenges you, you get away with it but if you haven’t the banker card and one of the other players doesn’t believe it and challenges your action, you have to show the card. If you haven’t got the card you claimed you lose a life and that card, but if you have it, the other player loses a life and you exchange your card with another one from the deck. 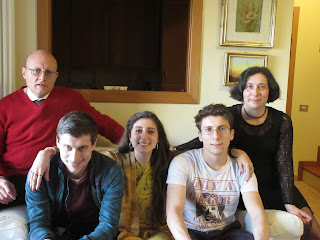 I played a game with my three children on Boxing Day and the first thing they told me was: ‘you have to lie, mum, if you want to win’. I found the characters of the cards intriguing, ironic and astonishingly lifelike in some cases. Here are some examples:

Guerrilla: can kill with only 4 tokens (instead of 7);
Priest: can collect 1 token from each player at each turn, except from the players who claim to have a priest card;
Judge: gives three tokens to target and the target player loses a life;
Intellectual: when a player loses a life they can claim the Intellectual card, they put the card aside face down and take 5 tokens, but loses the life all the same;
Communist: can take three tokens from the player with the most coins and give them to the player with the fewest coins;
General: pays 5 tokens to the Treasury and all the other players become targets and lose a life.

I think the list could be improved by adding, for example, the teacher, the headmaster, the conjuror, the estate agent etc. The player who survives this massacre wins, of course. I must say it was excruciating to choose which of my children to kill first, then I got involved in the game and it became easy. Finally, I managed to win twice without lying or pretending to be a character I didn’t have, which was something.

I received mainly books for Christmas, poetry collections and Margaret Atwood’s work, which I greatly appreciated, along with some beautiful earrings from my husband and handmade natural soap from friends.

Another must-do I never miss when I am in Italy is shopping, and, as usual, I bought a good supply of clothes, shoes and earrings. My daughter instead concentrated on bags and satchels but couldn’t find what she liked, I suggested her to visit M&M leather workshop in London once back in England. I also looked for some bomboniere for my son’s wedding. This is an all Italian tradition, a little present to give to the guests for important celebrations, like Christenings, First Holy Communions,

Confirmations, weddings, sometimes even graduations and engagements. They usually have some sugared almonds (confetti in Italian) in a little paper box or wrapped in tulle fabric and tied with a ribbon. Little fake flowers are also added, sometimes along with a small object, e.g. a key ring, a brooch or a tiny silver thing. The confetti can have different colours according to the event: white for a wedding (silver for 25 years of marriage and gold for 50 years), pink or blue for a Christening, red for graduations and green for engagements. I bought a few samples of bomboniere to bring to my son and his fiancée so they can choose the one they like. 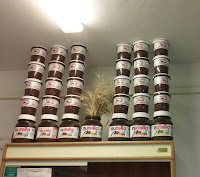 My mum was particularly busy finding objects to renew her house. This is her main focus at the moment: making her home comfortable, redecorating or renewing part of it to fit her needs and making her feel at ease. The house is too big for her now and full of good and bad memories, she needs to do a sort of spring cleaning, let some fresh air in metaphorically speaking, and mainly reshape the two rooms she lives in most. I tried to help her move some furniture, assisting her in choosing new upholstery, arranging photos in frames and buying new things she could put in places she had emptied (throwing away what she didn’t like). We made a good start but there’s still lots to do. 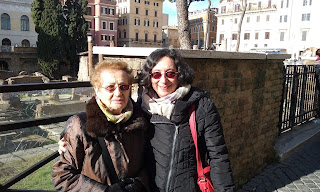 Posted by http://carlascarano.blogspot.co.uk/ at 04:18 No comments: