My writing desk is in the kitchen. The rough Ikea wooden table is surrounded by Ivar shelves packed with books. It is the heart of the house, handy for cooking. The front door is on the right, the living room on the left. It is stereotypical in a way but comfortable. On the table my mac laptop is at the centre surrounded by a pile of poetry collections waiting to be reviewed, literary magazines, the latest issues of The Poetry Review, 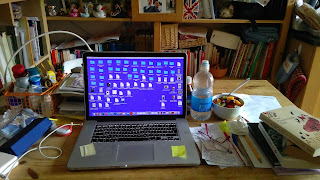 first and second drafts of my writing, handwritten in lined paper and in print, a printed copy of my PhD thesis, pens of different colours, pencils, lipsticks and nail polish, and a bottle of water. Food appears and disappears, mugs with tea or coffee come and go. On the right side there is my calendar with a list of the things I need to accomplish on the day or during the week and the week’s menu. I make sketches too from time to time digging colours, brushes and paints from a box under the table where I keep my art materials. As I have no more space on the shelves, I keep my PhD files in plastic pink boxes under the table as well. The whole thing looks a bit cluttered at first glance, though I try to tidy up from time to time, but I can navigate through it easily. Needless to say, we never have dinner in the kitchen.

During the winter lockdown I attended several zoom events I wouldn’t have ever imagined to take part in person. For example the Wayleave press poetry readings in the Lancaster area, the Ambit 242 launch, a conference on Lydia Davis with people speaking from around the world, the Poetry Society’s Keats anniversary event, Margaret Atwood’s talks and interviews from her house in Toronto and Woking Art Society’s demonstration sessions and workshops. After all I found that lockdown has its advantages, you can’t meet people in person but you have the chance to meet many more people online and attend events far away. I suppose that people with disabilities and elders have more chances to attend zoom events than meeting in person and maybe in the future, when lockdown ends, zoom meetings might still be a good alternative. Besides, in January and February I was working from home most of the time, which was more relaxing as I avoided commuting to London. 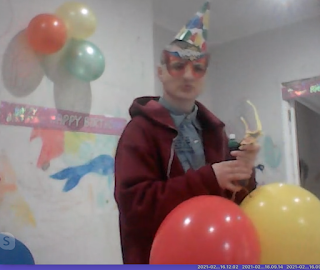 In February we celebrated my husband’s and my autistic daughter Valentina’s birthdays and in March my other daughter’s and my son Francesco’s birthdays too. For Valentina and Francesco we had it through Skype exchanging cakes remotely and with distanced clapping. Francesco made his own amazing cakes and Valentina’s carers organised a party in her apartment with presents, piñata and balloon decorations. I had sent a box to Valentina the previous week with our presents, to give them time to isolate everything for 72 hours. She was very happy and well aware of what was going on. 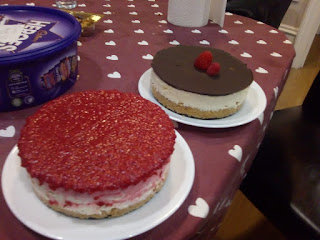 I wrote reviews and articles as usual and some of my poems were published. Here are the links:

Josephine LoRe: poet and photographer, an artist at her best

Shanta Acharya, What survives is the Singing

Pat Edwards, Kissing in the Dark

David A. Romero, My Name is Romero

The Arctic: Culture and Climate

Poetry in Surrey Libraries blog (please insert the title of the poem in the search bar to access each one):

My short prose pieces Balloon and Bianca will be published by Backlash Press in the summer and my review of Margaret Atwood’s last poetry collection Dearly will be in the summer issue of Tears in the Fence. 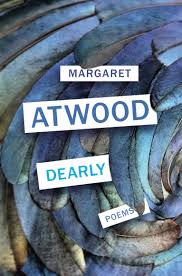 More of my poetry is here:

LG: My father, back home; In the beginning 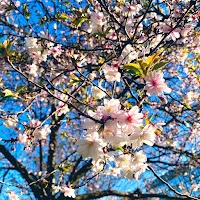 Hopefully spring is coming, I feel I need the light. My skin needs warmer temperatures and lighter clothes. We had a glimpse of double figures in late February after the snow and frost, which seemed unreal. I feel restless now and somewhat nervous, shall we have a lockdown-free spring and summer time? I Hope so.

Posted by http://carlascarano.blogspot.co.uk/ at 13:30 No comments:

Cooking, baking and eating were particularly comforting during the winter lockdown. I browsed on the internet, cut out recipes from magazines and purchased cook books on amazon to get inspired. Mary Berry is my favourite for cakes and Yotam Ottolenghi gave me new ideas on how to treat food in a natural way, have fun and vary our diet. He not only has simple ways of cooking but can also make a great dish out of a modest frittata or salad using ingredients that always surprise. There are different ways to get a meal on the table and my way is to spend some time in the kitchen, but not so much time. With the exception of Christmas dinner, which might take 3-4 hours, I don’t spend more than one hour per day cooking and/or baking. Pasta and rice are usually easy and quick to prepare; peeling potatoes might take longer, the vegetables I usually boil or steam then season them with olive oil or stir fry them before serving adding herbs and spices. Meat and fish might take longer but the oven is a great help, I just leave them there to roast. Baking is more a pleasure than a duty. I don’t have to do it daily and preparing a cake or making biscuits is relaxing and rewarding. The aesthetic of the final product is so appealing that for me it is a creative activity. Here are a few examples of what I made, I hope you enjoy them.

This recipe is a traditional Neapolitan pasta whose main ingredients are onions and minced meat seasoned with white wine. The kind of pasta they use is ziti, sort of long thin penne. I used cannolicchi.

You need: 300 g of cannolicchi or penne, one kilo of onions, 500 g of minced beef, one stick of celery, two carrots, parsley, a glass of white wine, two big tomatoes or two tbsp of passata, olive oil, salt and black pepper, parmigiano.

Grind celery, carrots and one onion and fry everything in a pan with oil. Add the meat, salt and pepper. Let it simmer for 5-10 minutes then add the wine and the tomatoes or passata. Finally add the rest of the onions finely cut and simmer for two hours until the onions almost melt in the meat mixture. Cook the pasta in boiling salted water, drain it and season with the Genovese sauce. Add parmigiano when serving. 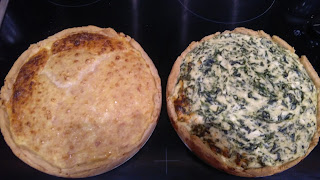 Here are two kinds of quiche: spinach and ricotta, and grated mozzarella and ham.

For the pie dough you need: 200 g of self-raising flour, 80 g of melted butter, half tsp of salt, three tbsp of lukewarm water, one egg.

Quiche with spinach and ricotta: 250 g of ricotta, 500 g of cooked spinach, salt, half a tsp of nutmeg, one egg. 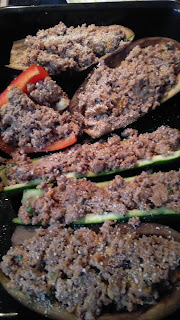 You need: one aubergine, one courgette and one pepper.

For the filling you need: 250 g of minced beef, olive oil, one carrot, one stick of celery, one onion, 250 g of chopped tomatoes or two tbsp of passata, parsley, two eggs, 150g of breadcrumbs, salt and white pepper.

Cut the vegetable in half, scoop the interior and put them in boiling hot water for 10-15 minutes. Mix meat and breadcrumbs with the eggs, add salt, pepper and parsley. Prepare the soffritto in a pan adding oil and the celery, onion and carrot finely cut. Add the meat mixture and cook for 10-15 minutes. Add the breadcrumbs and fill the vegetables with the meat mixture then bake for 20-30 minutes at 180 C. 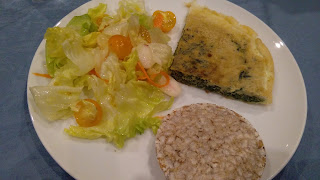 Cook the spinach in a pan and chop it. Mix the spinach in a bowl with the yolks of the eggs, the milk and the parmigiano. Add salt and pepper. Whisk the whites of the eggs separately  and blend them in the egg and spinach mixture. Cook the omelette in a frying pan for 4-5 minutes and then turn it over and cook for another 3-5 minutes or till ready. 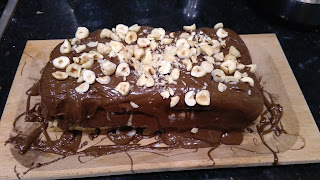 Prepare the semifreddo whisking the eggs and sugar in a bowl on simmering water for about ten minutes or until the mixture doubles and becomes pale. Whisk the double cream too and fold it in the egg mixture.  Finally add the ground hazelnut chocolate. Line a loaf tin with cling film. Cut one third of the sponge and place it at the bottom of the tin. Pour over a layer of the cream and egg mixture then another layer of sponge and the egg mixture again. End with the sponge and freeze the semifreddo for twelve hours or overnight. Before serving remove the cling film, warm the Nutella and pour it on the top along with the roughly chopped hazelnuts. 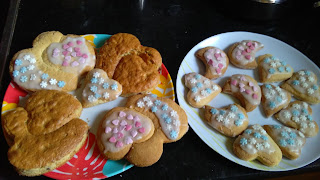 I made two kinds of biscuits, basic and sponge ones.

Mix all the ingredient and chill the dough for half an hour. Roll it out and cut hearts using a biscuit cutter. Bake the hearts on a greased tin tray at 180 C for 10-15 minutes. Decorate with icing sugar and sugar sprinkles.

Soak the raising in the liquor adding some water. Whisk the eggs and the sugar for 10-15 minutes then add the butter and flour. Drain the raisins and add them too. If the dough is too dry add one or two tbsp of the liquor as well. Bake the sponge mixture on a tray lined with parchment paper at 180 C for 10 minutes. Cut the biscuits using a heart shaped biscuit cutter and bake for another ten minutes or till ready. 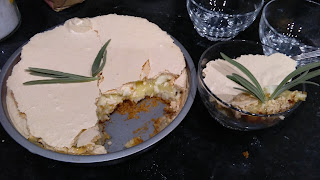 For this recipe I used what was left of the herbs from my garden.

For the meringue you need: egg whites from two of the eggs and 100 g of icing sugar.

Prepare the custard cream boiling the milk and cream and adding one whole egg and two yolks, the flour and sugar. Let it simmer until it thickens. Add the herbs and the lemon zest and let it cool. Grind the biscuits and add the melted butter. Place the biscuit mixture on a tin and pour the custard cream over. Whip the egg whites until stiff with the icing sugar and spread it on top evenly. Bake for 30 minutes at 180 C and for 15-20 minutes at 150 C. 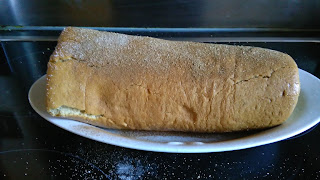 This cake was inspired by the recipe of the Bake Off winner Peter Sawkins.

For the sponge you need: 150 g of self-raising flour, four eggs, 100 g of soft brown sugar, 20 g of melted butter, half a tsp of cinnamon, half a tsp of ginger.

Peel and cut the apples in small cubes. Simmer them in a saucepan together with the cream, sugar, cornflour, cinnamon and ginger for 10-15 minutes. For the sponge, whisk the eggs with the sugar for 10-15 minutes, add the other ingredients and bake on a tray lined with parchment paper at 180 C for 15-20 minutes or until ready. Roll the sponge on a wet towel and let it cool. Unroll it and spread the apple mixture inside the sponge. Roll it again and sprinkle with cinnamon and sugar.

Posted by http://carlascarano.blogspot.co.uk/ at 01:20 No comments: