I had a wonderfully busy school year, difficult towards the end because of my father’s illness and death, but still full of important events.

My role of subject leader in language and literature was engrossing and rewarding. I could explore new links between different kinds of texts, find interesting resources and share them with my colleagues, as well as planning activities to engage students in a deeper awareness of the importance of literature in their daily life and for their future.

I don’t have any major plans for the summer, I am going to use this precious free time to think about what happened with my father and to take care of my mother, who is living with us at the moment. She moved to England at the end of May, as she was feeling lonely in Rome. She had a stressful time before and after the bereavement, a sort of breakdown. Unfortunately she didn’t have a good relationship with my father, though they had been married for fifty-five years, and tends to remember only the abuses she feels she had gone through. We are trying to distract her: we have planned trips, visits to museums and family gatherings. We hope she will relax with us in Surrey and overcome the loss.

This summer two great things are happening as well. I won the first prize of the John Dryden translation competition for a selections of poems by Eugenio Montale I translated with Keith Lander, and my eldest son is planning his wedding, which will happen next summer at Samlesbury Hall near Preston. 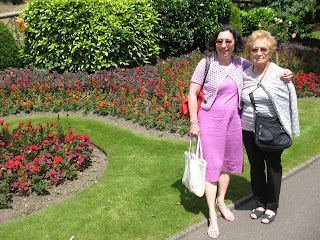 All about my summer holidays and my readings will be in my blog pieces from September on.


Have a good summer.

Posted by http://carlascarano.blogspot.co.uk/ at 13:26 No comments:

My father died on 30th April after a short painful illness. He was 83. In early March he had started feeling sick and he thought it was only an upset stomach. After two weeks he got worse and decided to have some checks. Being an old doctor he had his own ideas about what was going on in his body. He believed he only needed to take care of his genetically inherited illnesses, that is the ones that his parents had suffered from, but he hadn’t taken into account the fact that they had died before being 83. 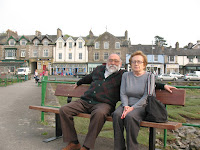 In the past he had suffered from gastritis so he thought it was the cause of his vomiting, he had a gastroscopy , which gave negative results, nevertheless he started a cure for gastritis. In spite of this he kept bringing up everything he ate or drank. He got worse, vomited day and night, could barely stand up and was visibly losing weight.
In the next two weeks we managed to convince him to see a gastroenterologist and have an abdomen ultrasound scan, which revealed advanced cancer. At first the doctors thought it affected mainly the intestines but after further checks they discovered there were metastasis on pancreas and liver as well. They excluded an operation as well as radiotherapy and chemotherapy as it was too advanced and he was too weakened.
My sister and I finally convinced him to go to hospital where they put him on an IV drip as he was quite dehydrated. After a few days he felt much better, the doctors decided to try a stomach bypass to let him start eating again. He regained his hopes and tried hard to eat again; getting better, he started to make plans about possible cures. But as soon as he was improving, he got worse again and this time it was a relentless fall. While he was in hospital, we could visit him only once a day, brought him something he especially liked or asked for, like iced tea, ice-cream, some kind of crackers or biscuits he loved. The hospital staff was very kind and helpful, they fed him, cleaned him and came whenever he called for help. I spent my Easter holidays there and travelled to and from Rome every two weeks spending long weekends with my mum, who was alone most of the time, and visiting him in hospital. When I was in England I phoned my mum and my dad every day, it was excruciating to hear his voice fading day after day. Even on the phone I could feel he was dying. 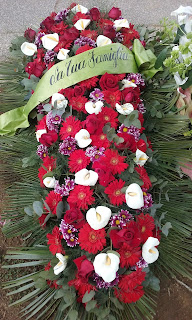 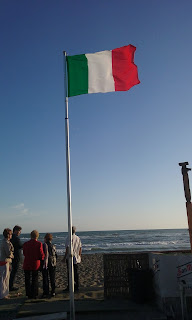 He was dismissed from the hospital on a Thursday with prescriptions of morphine, the doctors said he wouldn’t last more than two weeks. I arrived the following day, he was out because of the morphine. On the Saturday he died. My mum and I were at home near him, eventually I was relieved he had stopped suffering.
His illness was sudden and ruthless, a typical pancreas cancer. We knew it was hopeless but still believed he could last maybe a few months, he craved to live but when he realized it was pointless he only wished for a quick, painless death.
According to his wished he was cremated and his ashes were dispersed in the sea near Ostia. He was a clever, complex person, with multiple contradictory sides, capable of great generosity and ruthlessness, fondness and brutality. He taught me strong family values and helped me at times. He was my father, may he rest in peace.

Posted by http://carlascarano.blogspot.co.uk/ at 10:39 No comments: