Easter holidays with my mum 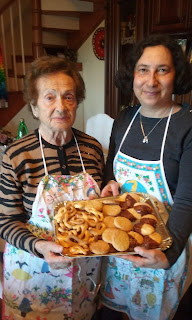 I was in Rome with my mum during the Easter holidays. The evening I arrived she welcomed me with a traditional Roman dish: coratella, made with lamb’s liver, heart and lungs and aromatized with onion and white wine. She prepared it with artichokes according to the best cooking tradition. It was lovely, so tasty and she was so happy to see me back eating hungrily her delicious food.
We had a very busy time. I helped her with housekeeping stuff, like bills, letters she had received and had no idea what they were about, photos she liked to frame, the gas rings that didn’t work (we had to replace the hob eventually) and we did some shopping together.

In the evening we watched the news, which were mainly about the formation of the new Italian government after the last elections in March. Unfortunately the results didn’t give a definite direction or an absolute winner, though the League Party and the Five Star Movement had the majority of votes. In one way or another, they will have to agree on some points, form a coalition, with or without the omnipresent Berlusconi, which has been a big issue, considering his pending sentences. Furthermore, the left party (PD), which formed the previous government, is out as its votes dropped from 25% to 18%.
The discussions on talk shows lasted hours, speculating on all possible alternatives and the inner thoughts of the different leaders, an exhausting debate that led to nothing. The President of Italy, Sergio Mattarella, was trying to find a solution and had meetings with the leaders of the parties, but it was clear it would take a few months to form a new government. Somebody whispered, or threatened, to go back to the polls and vote again, but none of the parties really wanted it as it wouldn’t have changed much.

Mum and I switched to more interesting channels after a while and watched history or art programs instead. There was one about the replica that replaced Caravaggio’s Nativity in 2015. The masterpiece was stolen in 1969 by Mafia to fund their drug trade and was never found again. In the program they said it must be hidden somewhere, maybe in Switzerland. It is a big loss for the Italian artistic heritage and the fact that it was never found is even more unsettling. What puzzled me was the enthusiasm for the copy expressed in the TV program. It is a perfect digital copy, just like the original, but still a copy. The citizens of Palermo seemed so happy to have something that covers the wall left bare by the theft behind the altar in the Oratorio di San Lorenzo, which is understandable, but still it is a copy. I am sure there is a sign below it, or so I hope, stating clearly that the original  was stolen and has not yet been found.
Another big piece of news was the too often recurring episodes of depressed fathers that kill their families. Most of the time the couple parted or divorced and the husband didn’t accept it, so the revenge is against the children first of all, and the mother, who sometimes survives by chance or is absent when the killing happens. The main target are the children, echoing Medea’s story but with a male protagonist deprived of the Greek heroine status, they are just desperate murderers. Needless to say, the surviving mothers are devastated by the experience that dooms them to a haunted life.
My mum and I also visited an exhibition: ‘Hiroshige, visions from Japan’ at the Scuderie del Quirinale. Hutagawe Hiroshige lived in the 19th century and was considered a master in painting different weathers and the changing of seasons as well as birds, flowers and fish. Among his most important works are the sixty-nine stations of Kiso Kaidō, which represent the famous places of a pilgrimage route in colour woodblock prints and include some views of mount Fuji. My favourite

pieces were the detailed large fish series, extraordinarily and simply realistic while at the same time incredibly expressive in the shape and movement they communicate to the viewer. He also produced comic pieces that satirize historical event or traditional Japanese legends, like the battle of rice balls and sake, a parody of the battle for the succession of power in the 12th century.

The most striking pieces were certainly the views of Edo, modern Tokyo, for which he became famous. Some of the pieces have a unique perspective, influenced by photography. An object or an element in the picture is exaggerated in the foreground and the rest of the view is in the background in smaller details. For example, the branch of a tree or the hooves of a horse are magnified in close-up and the rest is seen through this lens. This is a very interesting, asymmetrical point of view that surprises the viewer and influenced Impressionist and Post-impressionist artists.

The exhibition also displayed a video that explained in details the production of a woodblock print from the painter’s picture to the final product. It was engrossing to see that what we had just admired in the exhibition was not the direct production of one artist but went through several time-consuming stages where different people were involved, which compromises a bit our romantic idea of the lonely artists who create a masterpiece all by themselves.

Besides coratella, my mum and I prepared the traditional Easter cakes we always make for the festivities, a cake with cheese, which is delicious with salami and prosciutto, and pastiera. We also experimented some new biscuit recipes you can find here below. 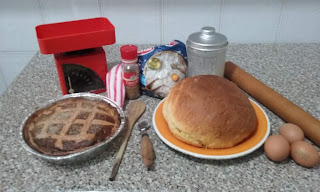 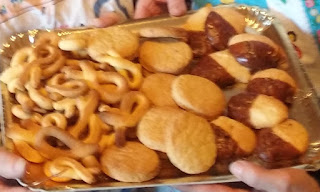 Posted by http://carlascarano.blogspot.co.uk/ at 00:55 No comments:

Here are some more cakes I dug out from my old recipe book and adapted for some occasions, like my son and daughter in law visiting us (cheese cake), celebrating my daughter’s new job (lemon cake), or the saffron buns I made for Saint Lucia last December, according to the Swedish tradition.

Cheese cake with white and dark chocolate
You need: 200 g of digestive biscuits, 75 g of melted butter, 500 g of full fat cheese, 100 g of natural yogurt, 150 of caster sugar, 4 eggs, 200 g of white chocolate, 200 g of dark chocolate.
Grind the biscuits and add the melted butter. Line a round spring-form cake tin with baking paper and spread evenly the ground biscuits at the bottom. 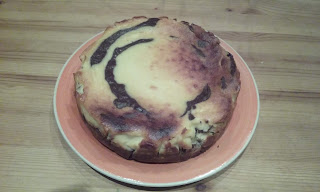 Lemon cake
You need: 300 g of plain flour, 170 g of white caster sugar, 50 g of butter, 3 eggs, 2 tbsp of natural yogurt, the grated rind and the juice of one lemon, 1 and a half tsp of baking powder, 1 tsp of bicarbonate of soda; candied lemon peel sticks and100 g of white chocolate to decorate. 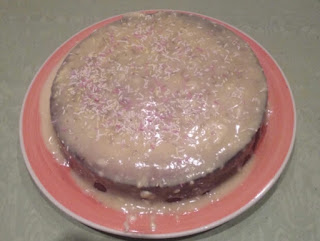 Grind the lemon rind with the sugar. In a bowl beat the butter and add the lemon rind and sugar mixture, add the yolk of the eggs and the lemon juice as well. Stiff the egg whites till firm and add it to the mixture together with the rest of the ingredients. Bake it in a greased round cake tin for 30-45 minutes at 180° C. When cool decorate it with lemon peel sticks and melted white chocolate, adding some drops of lemon juice in it.
You can have an ‘orange’ version of this cake using the rind of an orange and orange juice instead of the lemon, and orange peel sticks and dark chocolate to decorate. 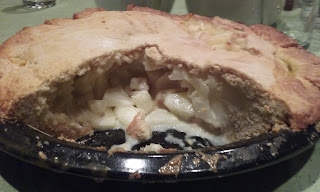 Prepare the dough mixing all the ingredients and let it rest for half an hour.
Peel and core the pears and cut them in cubes in a bowl. Add the cream, the egg, sugar and fennel seeds. Roll out half of the dough and line a greased pie tin, pour into it the pear mixture and cover it with the rest of the dough you have rolled out as well. Bake for 30-45 minutes at 180° C.

Saffron buns
You need: 500 g of strong flour, 100 g of golden caster sugar, 75 g of melted butter, 1 beaten egg and 1 more egg to glaze, half a tsp of salt, 5 g of saffron, dried yeast (7 g), 300 ml of lukewarm milk, and raisins to decorate.
Mix the flour with the sugar, the salt and the yeast, add the butter and the egg. Warm the milk and add the saffron; add it to the mixture and knead the dough (add some flour if necessary). Give them a round or an S-shape and decorate it with raisins. Set them on a greased oven tray and cover it with a film. Let it rest in a warm place for 2-3 hours. Finally, glaze the top with a beaten egg and bake for 30 minutes at 200° C. 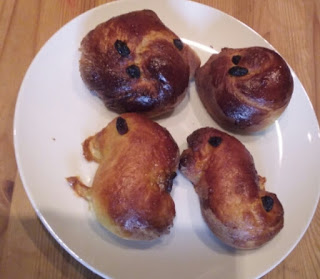 Posted by http://carlascarano.blogspot.co.uk/ at 23:28 No comments: