Our best summer trip was in the middle of July, when we headed north to attend the graduation of my son’s fiancée in Manchester. We had a wonderful celebratory dinner together with her family at an Italian restaurant in Didsbury. We had such a good time and I was so happy to meet her grandparents as well. 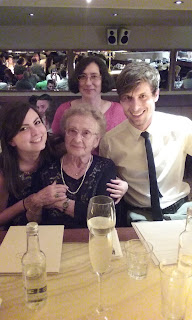 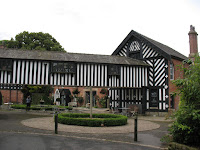 The following day we went to visit Samlesbury Hall, an ancient manor near Chorley where my son and his fiancée are going to get married next year. It’s a beautiful place dating back to 15th century. The Great hall where the wedding will happen has a large fireplace, timbered ceiling and stained glass windows. The outside of the building is in a typical half-timbering Tudor style with floral patterns. We had our lunch in the restaurant: great risotto, hot pot ‘made how it should be’ and delicious Eton Mess. An ideal place for a wedding. Needless to say, we are already planning who we’ll invite from Italy and where to stay. The Hall has a lodge and shepherd’s huts (sort of gipsy caravans), and there is a hotel nearby as well. I’m also thinking about what I’m going to wear, being the bridegroom’s mother I need a special outfit, hat and all. It will be wonderful and rather emotional experience. 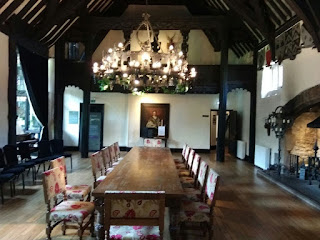 Coming back south we stopped at Wolverhampton for the John Dryden Translation Competition prize ceremony, as I won the first prize together with Keith Lander for our translations of some poems by Eugenio Montale, the famous Italian poet who won the Nobel Prize in 1975. It was so rewarding for me and Keith after countless rejections. 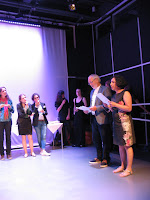 Translating Montale’s poems was long and hard work. Sometimes we spent days on one word trying to find the best possible meaning but also a word that had the right sound, because in poetry it is not only the meaning that counts, sounds and rhythm are paramount as well. It had to make sense and sound beautiful as well. We always wondered if our translations conveyed the real meaning and were understandable in English. In this way we were sure we were not misleading our future readers.
Ideally, a perfect translation should adhere to the original meaning and be a piece of art in itself, but one that can’t replace the original. Like a good cast of a famous statue, it gives you the idea but will never be the masterpiece.

I had some other interesting moments when I read my poems at the Phoenix Rising event at Woking park, a music festival with a touch of poetry, and at the New Inn in Send where there is an open mic on the third Monday of each month organized by the leaders of Woking Stanza group. I also decided to join the well established Woking Writers Circle whose members meet on the third Thursday of

each month at Strollers Centre, Goldsworth Park. Last but not least, I enrolled in a course with the Poetry School starting in autumn, which is a way to cherish my creative side in spite of my full time job commitment. Creativity is part of my work, a big part as I transferred all the skills I learned in the creative writing and art workshops I’d attended in the past fifteen years, into the lessons I prepare for school. Teaching comes from learning and one thing can’t be without the other. 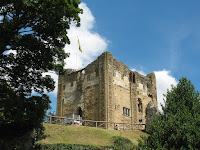 My mum was with me everywhere I went, we had fun together and I could see she managed to have a good time now and then. My father’s death was a big blow for the whole family, no wonder she’s having an unsettling period of time. We often went shopping as she wished to buy presents for all her friends and relatives in Rome. We often popped in antique and charity shops, walked around shopping centres in Woking and Camberley, strolled in Guildford centre and, why not, Chobham High street. I added a new piece of furniture to my already crowded house, a roughly painted sideboard I found in a vintage shop in Camberley. I placed it in the only free space left near the entrance door and I must say it fits perfectly.

Other things I did regularly during summer were exercising every day at least ten minutes with my mum, who needed some specific stretching exercises to tone her leg muscles and spine, and I went cycling. I also played Pokémon GO with the help of my eldest son who is an expert. I'm only on level 12 and can’t have a go at Chobham Cannon Gym yet as my most powerful Pokémon is only 594 CP, which is not enough to beat a Magmar with 961 CP. My son says I should reach at least level 20 to make my Pokémon fight in a Gym but I haven’t much time to play now that the holidays are over. Besides learning countless Pokémon names, like Drowzee, Poliwag, Weedle, Pidgey and Pidgeotto, Venomat and Kakuna, I became skilful in using the Razz Berry to distract them, and throwing the Poké ball to catch them. 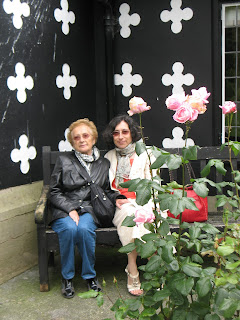 Some Pokémon are pretty tough and break out or run away after you have thrown a Poké ball at them, others are easy and evolve quickly, gaining points and combat power. One of the lovely things of the game was discovering the Pokéstops where you can shop, that is gain items you need to catch or feed your Pokémon, like Razz Berries, Poké balls, incense and eggs you can incubate and hatch your own Pokémon. There are a lot of Pokéstops in Chobham: the Sun Inn, St Lawrence church, the War Memorial Gates, Edmund Moore Chest Tomb, Frogpool house, Chobham museum and the Pear Tree house. It’s a way to have a nice walk and discover the world around you. I’m definitely proud of myself.

Posted by http://carlascarano.blogspot.co.uk/ at 10:57 No comments:

It has been a relaxing, sunny summer and I spent it entirely at home, in Surrey. I must say I enjoyed it, my mum was with us as well. She moved to England after my father’s death at the end of May and she’s still with us. At first she missed Rome and her home very much, but then she got used to the English summer (which was pretty good this year) and our routines. She’s still grumpy from time to time but much happier and relaxed that when she was in Italy. Sometimes she grumbles that the fruit and veg is not as tasty as the Italian ones, my way of making tomato sauce is weird and there is always something too hard for her false teeth. But on the whole we got on well. 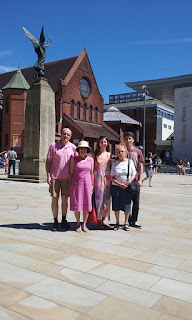 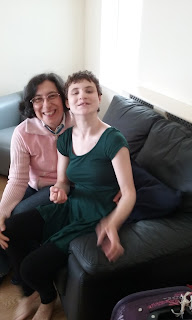 We couldn’t visit all the places we would have liked to as my mum got tired easily, so we stayed at home most of the time, except for a few visits to London and to the north to see my autistic daughter Valentina, who lives in a residential school near Doncaster. She is doing very well, enjoys the new school, the staff and friends around her. We went to see her every fortnight taking turns not to leave my mum alone at home. Valentina was happy to see us each time we went; once she took us to see her friends’ houses and she always wore all the new clothes we brought her, one on top of the other. She also chose some more clothes from fashion magazines we brought, pointing at her favourite colours, one day all blue and green, another time orange and black, or only purple. If we dared to give her the wrong colours she chucked the clothes. We found her lively as usual and determined to get what she wanted. The residential school where she lives now is very well organized and the members of the staff know how to cope with her complex needs. We spent a few weekends there as well in the comfortable accommodation they provide for family and enjoyed a delicious full-English breakfast in the morning.
My other daughter was in Japan (she attends evening Japanese classes and is fond of Japanese culture, art and fashion). In spite of my typical-Italian-mum behaviour, worrying about food, bad encounters and unpredictable dangers, she had a wonderful time. Everything went well and she brought back gorgeous clothes, postcards, photos and presents for everybody. We Skyped every few days, which was a great relief. 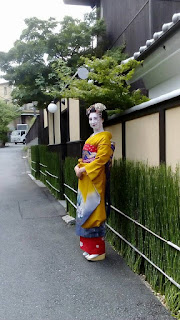 My husband had a very busy, sporty summer. He watched all EURO 2016 and most of Rio Olympic Games switching from the BBC to Italian radio programs and the Swiss Italian channel, sometimes watching and listening to all of them at the same time. But his greatest achievement was definitely the new lawn. He dug and removed all the mossy stuff that covered the front garden and laid proper turf on its place. For a few weeks we were busy watering our precious new green lawn, which cost us so much sweat and toil, as the weather was gorgeously sunny and dry. It settled, and we happily declared our task accomplished. We also added pink and blue hydrangea bushes to complete the idyllic picture.


What more can I say about the weather? Well, I didn’t miss Italy this summer, and neither did my mum. It was warm, sunny and dry, with a reasonable amount of blue sky and rarely too hot or too humid. It was just right. 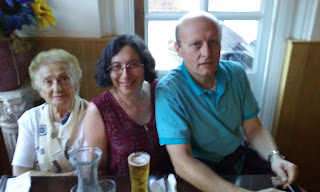