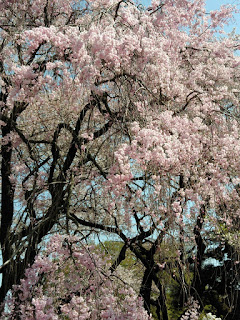 I will be away the whole month of April. My plans are to fly to Italy then to Tokyo to see my daughter who is attending an MA course in fashion at Bunka Gakuen University. I will be there with a friend of mine as well and we will visit a bit of Japan together. Hopefully, it should be the time of cheery blossoms. So we will celebrate spring in the best possible way and be back in Italy for Easter. I promise I will post about my Japanese experience in May and June.

Inspired by my coming holidays, I made a cake decorated with cherry flowers for spring time, here is the recipe:

Beat the egg yolks with the sugar then add the butter, the flours as well as the baking powder and the bicarbonate of soda. Beat the egg whites until stiff and add it to the mixture. Pour the cake mixture in a round greased tin and bake for half an hour or forty-five minutes at 180°. 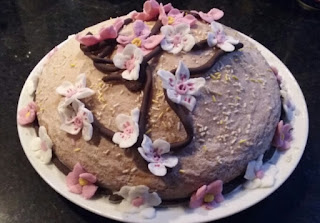 For the decoration prepare the icing mixing the ingredients in a blender and put it straight away on the top of the cake. Let in cool and make the flowers. You can use a biscuit cutter or a mould if you wish, or make them by hand shaping the five petals and the core. There are infinite examples of cakes decorated with cherry blossoms on the internet you can get inspirations from them and create your own special one.

Have a lovely Easter time!


Posted by http://carlascarano.blogspot.co.uk/ at 23:48 No comments:

Writing has been at the top of the list of my creative, and non creative, activities recently. I wrote and submitted the first draft of two chapters of my PhD thesis on Margaret Atwood in the winter term and wrote an article on Surfacing by Margaret Atwood for the Guest Blog of the Centre for Myth Studies of the University of Essex, here is the link: https://essexmyth.wordpress.com/2019/01/28/margaret-atwood-surfacing/ 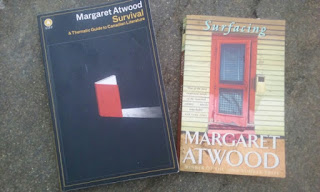 The article followed a session I had on 23th January at Colchester campus (https://essexmyth.wordpress.com/2019/01/16/surfacing/ ) on myth and fairy tales in Surfacing. I did a presentation, my first one at academic level, and a discussion followed on some poems by Margaret Atwood I had selected. The whole experience was riveting. Everybody was so welcoming at the Myth Reading Group that I felt both excited and at ease. It gave me a further boost to carry on in my research on Atwood and be committed to my academic work.

I also wrote and published a few poetry reviews, here are the links:

Tales of the Unaccepted by Ray Pool: https://londongrip.co.uk/2018/12/london-grip-poetry-review-ray-pool/

And here is my new profile on Write Out Loud website: https://www.writeoutloud.net/profiles/carlascarano

I still write poetry and read my poems at the open mics at The Lightbox in Woking and at the Keep in Guildford. From time to time I redraft my work with the help of tutoring sessions with Dawn Wood (http://www.dawnwoodartist.co.uk/ ), a Scottish poet I met at a Templar Poetry event. I am trying to put together a pamphlet and submit it for publication, but it is not an easy job. I am also attending some interesting workshops at the University of Reading. The group is called Longitudines and they always invite a writer or poet who talks about their work and reads it. Some writing exercises follow as well as engrossing discussions.

My artistic creative side was triggered by some free drawing sessions I attended at The Lightbox in Woking under the guidance of Marianne Frost. We could wander around The Lightbox and draw

whatever we liked but we normally lingered in the Main Gallery or in the Upper Gallery. Marianne suggested to pay attention to light and shadow in our sketches using chiaroscuro techniques. I produced some nice drawings from a sculpture by Auguste Rodin and one by Jules Dalou, as well as other sketches from paintings by Cyril Mann and from the exhibition on Women in Photography. The activity was absorbing and relaxing, and it was a relief to realise I can still draw though I haven’t been practicing for a long time due to other commitments. I might go back to this hobby in a more serious way in the future.

After this creative revival, I played with a self-portrait I drew during a social event of the Woking Writers Circle. One of the members organised an interesting activity, we were instructed to hold a piece of paper against our face and draw our portrait on the opposite side without looking at it. The outcomes looked like the person in a surreal way, similar to Dubuffet paintings. I doodled with mine while chatting with my fellow writers and added some colours at home. At the end it looked like one of my autistic daughter’s pieces. She doesn’t do self-portraits but she is keen on drawing Futurama characters, especially Leela, and my self-portrait seems oddly inspired by her style. I also made a crocheted top for my other daughter and carried on with my embroidery project. This time my inspiration was a photo I took in Woking this winter of tree branches interweaving against a bright blue sky.

About my autistic daughter Valentina, we celebrated her 19th birthday last February with lots of presents, banners, balloons and a big strawberry cake. My son and my daughter in law, who live in Leeds, came as well. It was a good occasion to have a sort of family gathering around Valentina. She had great fun and drew a lot of Leelas with different hair colours but sticking to her unfailing pattern. 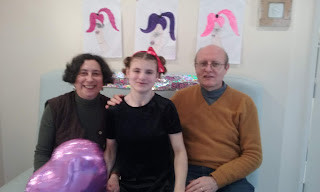 Following a renal colic at Christmas, the doctors made some checks and found an angioma in my liver and the adrenalin gland a bit bigger than normal. So I had an MRI scan with contrast and blood tests which resulted all right, no danger of cancer at the moment, though I need to check it again in three months’ time 😊. The other good news is that I passed one stone but I have a smaller one still lingering on my left kidney 😕. They said to keep drinking …water.

Posted by http://carlascarano.blogspot.co.uk/ at 03:56 No comments: