I was flabbergasted by the various kinds of flours in the supermarket shelves and decided to try some of them. I experimented both with biscuits and cakes recipes, just to have something special from time to time.

You need: 200 g of rice flour, 150 g of icing sugar, 4 eggs, 30 g of melted butter, one tsp of baking powder and 100 g of dark bitter chocolate to decorate.
Whip the eggs with the sugar using an electric mixer for 15-20 minutes. Add the melted butter, the flour little by little and the baking powder. Keep whipping for another five minutes. Pour the mixture in a greased tin with the shape of a donut and bake for half an hour at 180° C. When cool, melt the chocolate in a pan and pour it on the cake.

Biscuits with rice flour
You need: 200 g of rice flour, 100 g of caster sugar, 2 eggs, 30 g of melted butter, half a tsp of baking powder and 50 g of glacé ginger in cubes or dried chopped apricots.
Mix flour and sugar in a bowl, add the eggs, the baking powder and the butter. Finally add the chopped apricots, or the glacé ginger. Mingle them in the mixture using a fork and then knead the dough. Shape little balls, then press them with the palms of the hands and set them on a greased oven tray. Bake for 20 minutes, or till golden, at 180° C.

You need: 250 g of buckwheat flour, 150 g of golden granulated sugar, 2 eggs, 2 tbsp of olive oil, one tsp of baking powder, half a tsp of bicarbonate of soda, 150 g of cranberries and three tbsp of Demerara sugar.
Cook the cranberry in a pan with the Demerara sugar and 2-3 tbsp of water. Prepare the cake beating the eggs with the sugar, add the olive oil and the flour together with the bicarbonate of soda and the baking powder. Finally add two thirds of the cranberry and mix well. Pour the mixture in a greased cake tin and finish scattering the remnant cranberries on top. Bake for 30-45 minutes at 180° C.

Biscuits with buckwheat flour
You need: 200 g of buckwheat flour, 2 eggs, 100 g of golden granulated sugar, 2 tbsp of olive oil, half a tsp of baking powder and 50 g of dried cranberries.
Mix flour and sugar in a bowl, add the eggs, the baking powder, the dried cranberries and the olive oil. Mingle bits evenly using a fork and then knead the dough. Roll out the dough and cut the biscuits using a cookie cutter, finally set them on a greased oven tray. Bake for 20 minutes, or till darker, at 180° C.

You need: 350 g of rye flour, 3 eggs, 3 tbsp of sunflower oil, 170 g of muscovado sugar, grated zest and juice of an orange, one tsp of baking powder and half a tsp of bicarbonate of soda. Orange peels sticks and melted dark chocolate to decorate.
Beat the yolk of the eggs with the sugar and add the orange zest and the juice. Then add half of the flour, the baking powder, bicarbonate of soda and the sunflower oil. Whip the whites of the eggs till stiff and blend them in the mixture as well. Add the rest of the flour and pour the mixture in a greased tin cake. Bake for 30-45 minutes at 180° C. When cool, decorate with the orange peel sticks and pour some melted dark chocolate on top.

Biscuits with rye flour
You need: 200 g of rye flour, 2 eggs, 50 g of melted butter, 100 g of muscovado sugar, grated zest of a lemon, half a tsp on baking powder, half a tsp of cinnamon.
Mix flour and sugar in a bowl. Add the eggs, the lemon zest, the cinnamon, the baking powder and the melted butter. Mingle it using a fork and then knead the dough. Roll out the dough and cut the biscuits using a cookie cutter. Finally set them on a greased oven tray. Bake for 20 minutes, or till darker, at 180° C.
I hope you enjoy them all! 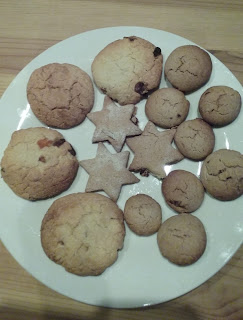 Posted by http://carlascarano.blogspot.co.uk/ at 02:32 No comments:

The Eurovision contest is an entertaining, diverse and controversial showcase, where catchy tunes mix with tacky performances. But I always enjoy it, especially the voting bit when the countries conveniently cast their votes according to specific geographical areas (all the eastern countries vote for each other, the same for the southern ones and so on). The UK ends up being a bit isolated, but these are the disadvantages (and advantages) of being an island. 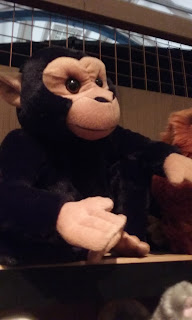 I am particularly fond of the Italian song this year, Occidentali’s Karma (Westerners’ Karma), sang by Francesco Gabbani, an extremely funny, clever and fresh tune. The song is catchy and the lyrics cracked me up. It can be defined a postmodern intertextual high quality text, or to say it in a simpler way, it ridicules all of us mixing quotations from different sources. There is a good list of the ideas and texts it refers to here: http://wiwibloggs.com/2017/02/15/occidentalis-karma-lyrics/174193/  (with the English translation of the lyrics at the bottom), which I am going to summarize briefly as well as adding some personal considerations.

There is also a video clip with English subtitles on youtube: https://www.youtube.com/watch?v=0zNfw-GDm20

Here is the lyrics:

The beginning refers to the famous Hamlet’s soliloquy (to be or not to be) and Eric Fromm (to have or to be). The song carries on quoting the alcoholics anonymous (which now are selfie-anonymous, alluding to our attention-seeking addiction), advertising sites (AAA, everything can be effectively advertised) and the famous ‘Singing in the rain’ by Gene Kelly, which seems just to rhyme with panta rhei (everything flows, by the pre-Socratic Greek philosopher Heraclitus), but it is not so simple. In the film Singing in the Rain the main actress (Kathy) is dubbed by Lina, the nice girl with an angel voice, as it often happened when silent films were converted into a talkie. At the end the curtain lifts and the audience finally sees that Lina is the real star. It’s clearly a sham.

The song mocks serious and pretentious attitudes not only towards Oriental philosophies and religions (which the Westerners use as a way to relax, have fun or self-advertising) but in a more general way it teases the way Westerners use and misuse everything. The world has become a big supermarket, we go around and grasp whatever we need with little respect for others (other people, animals and the environment). The funny thing is that we are pretty unaware of it and believe (or pretend) we are doing nothing wrong, we are the best. But eventually who cares, panta rhei.
The cherry on top is the dancing naked ape (referring to the famous Desmond Morris’s book The Naked Ape: A Zoologist’s Study of the Human Animal published in 1967), who always rises like the phoenix from the ashes. Its instinctual, playful and aggressive behaviour represents us all at our best. This is who we are at the end, let’s acknowledge it. I don’t think this is referring only to sex, it’s about all our attitudes towards the others: ‘life is distracted’, the ape comes back and ‘men drop’ (cadono gli uomini). We take advantage of others, cheat them, play with them in a more or less abusive way. We are all dancing apes pretending to be civilized respectful humans, and we need to acknowledge it.

According to Desmond Morris, this happened because our cultural and technological progress developed too fast and our biological characteristics couldn’t keep up with it, we would need some million years to bridge the gap. Consequently our civilized goals are too high a stake sometimes and we can’t cope with it, we fall back on our instinctual side. Or our instinctual side is something we can’t get rid of to survive biologically, so ‘we should tailor our intelligent opportunist advances to our basic behavioural requirements’.

Other references are to Karl Marx (Religion is the opiate of the masses, which becomes ‘All know-all with the web cocaine of the masses opiate of the poor’) and Oriental spiritual terminology (Nirvana, Mantra, Namaste), which are not mentioned with disrespectful intentions but are just a way to mock the people who practice them without really understanding the meaning of it.

The quotations are well chosen, a clever pastiche that communicates a clear thought-provoking message. It is a warning or just a way to say that the king is naked and we can all see it, open your eyes and don’t make much fuss about tolerance and consideration towards the others. We just grab what we can and how we can.

The video clip is brilliant as well, Francesco Gabbani is a good singer and dancer, and above all it is his body language and facial expression that spices it up, he winks at us in a typical knowing Italian way. You know what I mean, he seems to say. And we do.

The song won Sanremo Music Festival 2017 beating Fiorella Mannoia’s Che sia benedetta (Let her be blessed), a moving song about the beauty of life but no match with Occidentali’s Karma.
Will it win Eurovision contest as well? Let’s wait and see. I believe it deserves our votes.

Posted by http://carlascarano.blogspot.co.uk/ at 02:38 No comments: