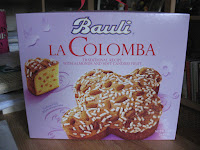 The “Easter Dove” is a typical Italian cake we always have at Easter. We usually buy it ready-made in colourful boxes, as we do with Panettone and Pandoro at Christmas, but this year I decided to make my Colomba at home. It took several hours as the dough needs time to rise, and I couldn’t find all the ingredients, but the final result was good. Here is the recipe.

For the glazing you need: 3 egg whites, 50 g of sugar, 100 g of confectionary sugar (I couldn’t find this it so I used some coloured sugar) and 100 g of almonds.

Mix 150 g of flour, yeast and water and knead for 5-10 minutes. Cover with a damp cloth and let it rest in a warm place for one hour.

Mix the rest of the flour with Demerara sugar, the yolks, 50 g of melted butter, salt, milk, vanilla essence, the zest of the lemon and the zest of the orange. Combine the two mixtures and knead. Cover it with a damp cloth and let it rise in a warm place for two hours. 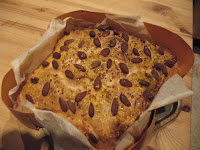 After two hours knead the dough adding the candied fruit and the rest of the melted butter. Let it rise for another three hours in a mould with the shape of a dove (I made mine with some strong paper and lined it with baking paper).

For the final touch you need to prepare the glazing, whipping the whites until stiff with the sugar. Spread it on the dove and decorate it with the almonds and the confectionary sugar (or coloured sugar). Bake for 10 minutes, 200 °C, and then for 30 minutes 180 °C. 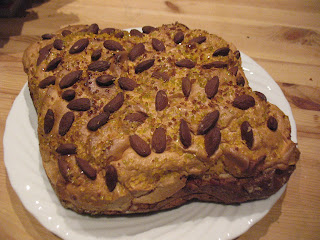 Posted by http://carlascarano.blogspot.co.uk/ at 07:36 No comments:

There’s so much to see in Rome that each time I go back I find some new places to visit. This time I went on a guided tour in the Domitian Stadium under Piazza Navona, then went to the museum dedicated to the Roman Republic of 1849 at the Gianicolo Hill and finally re-visited the Capitoline Museums at the Capitoline Hill. 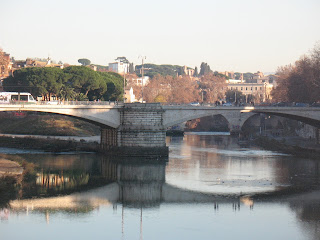 An archaeologist of the Artefacto cultural association (artefactoroma.it) was our guide around the ruins of the Domitian Stadium. There isn’t much left as the beautiful piazza Navona replaced the stadium, and without the archaeologist’s precious explanations I probably would not have understood much. 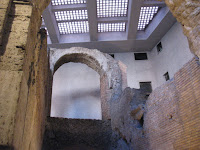 The Stadium was built for athletic competitions: running, long jump, wrestling and boxing. Women were not admitted as the athletes performed naked, though there were plenty of brothels under the arches of the stadium (which in Latin were called fornices, which the word fornicate originates from). Domitian (81-96 AD) was a very popular emperor; he completed the Colosseum, the Circus Maximus and built the Stadium. Near the Stadium there was also a theatre (Odeon), now completely destroyed, only the shapes of some buildings remind of its plan. 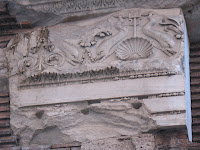 The Stadium could seat about thirty thousand spectators. In the Middle Ages it became a block of flats with shops at the ground floors. The building materials were scavenged, as were most Roman buildings. The main structure was made of brickwork faced with painted plaster and marble (travertine from Tivoli, in the eastern outskirts of Rome). Some of the flat square terracotta bricks were on display around the walls showing the factory mark on one corner. The archaeologist digressed saying how well organized the ancient Romans were, they not only numbered the bricks, they knew exactly how long it would take to reach Lutetia (Paris) from Rome working out the change of horses and the best routes. Everything was so well planned that it is hard to believe that this perfect organization was completely lost throughout the centuries in nowadays Italy.

All the beautiful paintings and marble decorations went lost as well, they were re-used especially in churches or burned to make mortar. Ancient Roman monuments were considered open air quarries everybody could exploit. 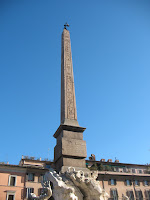 In time the stadium arena became a square (piazza Navona, the name comes from Campus Agonis, competition field, then changed in agone, nagone, and finally ‘navona’) and a market place; buildings replaced the terraces of the stadium. An intriguing story that testifies how the evolution of buildings can reflect the history of its people. 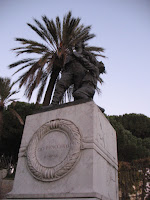 At the Gianicolo (Janiculum Hill), from which we enjoyed an astonishing view of Rome, we admired the famous statue of Giuseppe Garibaldi on horseback and strolled along the path that leads to the Gate of San Pancrazio. The museum at San Pancrazio is dedicated to the battle Garibaldi led against the French troops that attacked the Roman Republic in 1849. It’s a small, interesting museum with free entrance. The legacy of the Italian patriots and of Garibaldi is commemorated in a sincere moving way. Most of them died in battle like Righetto, a child aged 12, and Ciceruacchio, a well known patriot who tried to flee but was caught by Austrian soldiers and executed with his children. Both Austrian and French troops came to Italy to help the Pope to restore order.

According to the rulers of the Roman Republic (Aurelio Saffi, Carlo Armellini and Giuseppe Mazzini) there should have been a free church in free state; the constitution they proclaimed on 3rd July 1849 had incredible idealistic statements echoing the French Revolution, like ‘sovereignty belongs to the people’, or ‘ the democratic regime is under the rule of equality, liberty and fraternity’, or ‘ the exercise of civil and political rights does not depend on religious belief’, ‘the republic sees all people as brothers’, and so on. 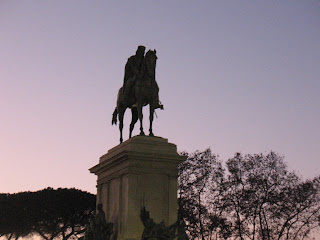 They were defeated, most died in battle, a few managed to flee. Rome was finally conquered in 1870 and became the capital of the Kingdom of Italy.

The video clips are the best part, they are projected on big screens and bring the historic events to life, and the actors that play the parts of the patriots take the viewer to the time and setting of that period. A large room features the reconstruction of the main battles projecting videos around the walls. Everything is subtitled in English and all the texts are translated, in case your Italian is not so good. There are also the red shirts of the garibaldini in various shades in glass displays and charcoal drawings made in prison by the patriots. A remarkable museum with a modern, effective exhibition that testifies the courage and high ideals of the Italian patriots. 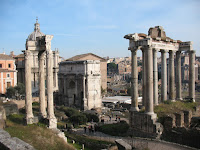 My final visit was to the Capitoline Museums I had seen them a long time ago before they were restored and rearranged. When I was young the ancient Roman statues were all packed in a few rooms with no space to look at them properly. The original statue of Marcus Aurelius (176 AD) was still in the square, now it’s under a glass dome in a splendid room full of light. In 1979 there was a terrorist attack (not ISIS or any other Islamic group, but Italian born extremist organizations) which damaged the famous equestrian bronze sculpture and  revealed its terrible conditions, due to being exposed to the elements for so long. It was removed in 1981 and restored, and a faithful copy was put outside in its place. 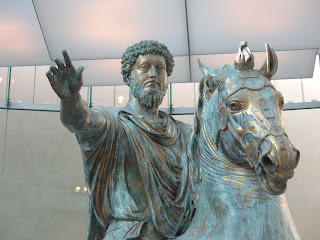 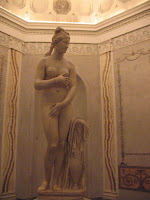 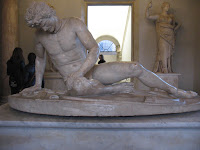 You can walk from room to room and admire the beautiful marble pieces and elegant statues like in an ancient garden. An underpass decorated with ancient inscriptions and Roman remains leads you to a terrace viewing on the Roman Forum and ends in the opposite building where the Capitoline Venus, the Dying Galatian and the Pinacoteca are. Definitely worth a long visit.

Posted by http://carlascarano.blogspot.co.uk/ at 13:11 No comments: