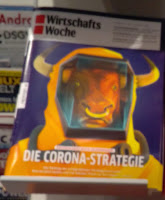 The development of Covid-19 in the past few weeks worried me because of my family in Rome. Luckily my mum is fine and my sister too. They stay at home as schools and shops are closed except for supermarkets and pharmacies. They are following all the rules the Italian government has recommended. I contact them through WhatsApp and Facebook every two days. My mum is lively as usual. Speaking of coronavirus regulations, she mentioned Mussolini’s motto, obbedire, credere e combattere (obey, believe and fight), with a belligerent stare. I had a good laugh as it sounds quite exaggerated and funny in coronavirus context. My sister is all right. Her school is closed and she is teaching distance learning at the moment. Her husband works in a hospital and is in contact with people infected but they have strict measures to follow and protect themselves from the virus. I cancelled my holiday in Italy during the Easter break and am planning to visit Italy but not before the summer. It will be hard not to see my family until July or August but the emergency is too serious, hopefully it will pass.

Despite this, the poetry environment I regularly attend in Woking area is very busy, though a bit affected by the pandemic. There are monthly readings at The Lightbox the last Thursday of the month and at The Keep in Guildford the first Monday, plus occasional readings and showcases at the Poetry Café in London and at Cranleigh Arts Centre. Then there is the Stanza group at the Maybury centre on the third Tuesday and the Woking Writers Circle meeting on the Third Thursday. I try to attend every event but sometimes other things overlap and I feel so tired in the evening that I prefer to stay at home. Attending poetry readings fuels my writing as I cannot always read the same poems so I need to write new ones. At a reading, Dónall Dempsey gave me an exercise book some time ago; it belonged to his sister. It is called Aisling, visions in Irish, and it is inspiring me to write with its turquoise cover spotted with bright leaves and the ruled pages.  At the moment I am mainly writing about cooking connecting it with family relationships and states of mind. I also published a few poems here:

What I was leaving: https://thebluenib.com/what-i-was-leaving-carla-scarano-dantonio/

My proposal on The Testaments by Margaret Atwood has been accepted at the conference organised by Accute in London, Ontario. I will attend the conference and present my paper in June, exciting! For the occasion, I decided to spend the whole month of June in Canada. I am planning my journey which will be focused on my research on Atwood’s work but will also give me the opportunity to have a holiday and see my Canadian friends again. I am planning to stay in Toronto for two weeks and study at the university libraries. I will also meet some Atwood scholars at the Department of English Literature at the University of Toronto. After Toronto, I would like to go to British Columbia and will probably meet my friends Pam and Crystal who live in the west. It will be a stimulating experience that will add material to my thesis and to my life journey.

The PhD research is going well. I have four chapters now and am going to complete the fifth chapter soon. I have also part of the introduction done. The maximum word count is ninety thousand words plus or minus 10% leeway. I have about seventy thousand words at the moment, so I think I only need one more chapter to write and complete the introduction plus conclusion. I believe that I will have a good draft by the end of summer. I should end by 2020 or the beginning of 2021.

Family things are going well too. My daughter Valentina is moving to Surrey at the end of March. My other daughter has just graduated at Bunka Gakuen University in Tokyo, an exciting experience that gave me the occasion to re-visit Japan. my youngest son is getting ready to spend three months in Nepal with VSO (Voluntary Service Overseas) and my oldest one, who just came to Tokyo as well, is having his good time with his wife in Leeds. Luigi and I stick to our routines and have a bit of fun from time to time visiting museums and exhibitions and going to Southbank concerts. Here are some exhibitions I visited and reviewed:

The Outside and the Inside: https://wokingwriters.wordpress.com/2019/11/20/the-outside-and-the-inside/

I also reviewed a few books and wrote some articles, here are the links:

Carol Coates, The stories they told her: https://londongrip.co.uk/2019/11/london-grip-poetry-review-carol-coates/

Richard Hawtree, The night I spoke Irish in Surrey: https://londongrip.co.uk/2020/01/london-grip-poetry-review-richard-hawtree/

My review on The blue boob club by Daphne Milne will be published on South 61.

I am busy knitting long long scarves for my daughters and my daughter in law with a nice soft wool I found at Hobby & Craft’s shop. I am also making bags with fabric and crocheted purses to sell at fairs (http://www.carlascaranod.co.uk/?Readings_%26amp%3B_Fairs ) and I am working on new

paintings for spring exhibitions. I gave up embroidering poems at the moment but would like to go back to it as I started a new one some time ago with the famous phrase from The Handmaid’s Tale: Nolite te Bastardes Carborundorum (Don't let the bastards grind you down), in red on a white cloth. I am currently working on a round shaped canvas depicting a painting that combines mandala motif with red autumn leaves. I chose acrylics for the final pieces but I am still working on several drawings using mixed media to find the right composition and colours. The piece will be a mixture of abstract and figurative painting and should convey engagement to a centre in both a loose and controlled way. Maybe too many ideas to fit in one painting.

My Canadian interests brought me to read more books on Canadian culture and literature. Besides Atwood’s work. I am reading Indigenous literature such as the book by Kaitlyn Purcell I reviewed for The Temz Review, an online magazine in Ottawa (https://www.thetemzreview.com/scarano-dantonio-purcell.html ), and the amazing novel Medicine Walk by Richard Wagamese. It is the story on an Indigenous boy brought up in a farm by a foster parent he calls old man. The boy feels the land around him as if it is alive. He knows how to hunt and survive in the wilderness merging with the environment. His biological father, on the other hand, though brave and passionate with adventure, is ruined by alcohol and debauched life. Cultural and physical deprivations mark deeply the father’s life in contrast with the son’s dignity expressed in his simple life despite his young age. The boy wishes to take care of his father in his final days though the father never took care of him. In the novel, the presence of the woods, the land and the animals strikingly combines with humans in a harmony that is not necessarily peaceful but it shows the acceptance of both life and death, fight and surrendering. The tone is factual at times, especially in dialogues and in the descriptions of the work at the farm, and lyrical as well, poetic in some parts. A sense of profound empathy with nature develops throughout the novel; this shapes the Indigenous identity and fosters their dignity whose source is in their own land.

A different novel is Fools Crow by James Welch. It recalls the world of Plains Indians’ life before they were almost wiped off by the diseases brought by Europeans and the slaughtering carried out by the American army.  The attempt to maintain the memory of how this world was and why it is still so relevant for the Indians’ identity is at the core of the story. They show a very different mentality compared to the aggressive and exploiting-targeted western view. The land, intended as plants, animals, rocks and whatever is part of it, is at one with humans, according to the Natives. The land cannot be dominated but acknowledged and understood. Indians are sort of protoenviromentalists and their point of view, which colonisers thought was naïve, is now revealed as visionary in today’s global scenario. The Indians rituals, beliefs and hunting practices are evoked and described in the novel, an epic of a past world that faded and needs to be remembered in storytelling, that is, in language, to maintain its power and ensure identity. The story is centred on the rise of White Man’s Dog who steals horses at first, then becomes a warrior renamed Fools Crow, as he fooled the Crow chief making him believe he was dead then he killed him. The stories are about war, love, revenge and survival. They form the legacy of the Indigenous peoples and testify to their resilience.

Seven Fallen Feathers: Racism, Death, and Hard Truths in a Northern City by Tanya Talaga is a reportage of true stories that happened between 2000 and 2011 in Thunder Bay (Ontario) where seven Indigenous students went missing and were eventually found dead. They lived in a residential school far away from home and suffered persistent casual racism and deprivation that brought to their deaths. The government seemed absent or complicit in its indifference. The white western culture and the Indigenous people are depicted as distant one from the other. This unrelenting attack to Indigenous lives and culture, which started with the arrival of the first European settlers in North America in 17th century, is considered a cultural genocide. It was a real persecution to prevent transmission of Indigenous identity and values. The White Man annihilated them culturally as he could not destroy them completely physically. In Talaga’s work, testimonies mix with dreams, prayers and accusations. She reports that the abuses of residential school (a story that seemed to belong to the 19th century) lasted until the 1960s and the last school was shut down in 1996. Suicides due to deprivation and abuse are still common in Indigenous communities. Young people disappear, especially girls. Five of the seven students’ bodies, the ‘seven fallen feathers’, were recovered in a river. Talaga remarks that:

The inquest for the seven deaths began in October 2015 and ended in June 2016 but, according to the author, the families did not have any explanation about their children’s death. The jury said that four of the seven deaths were ‘undetermined’ and the other three were killed but they did not know exactly what happened. It seems that Indigenous people are considered second class victims for the police; so, the Indigenous peoples of Thunder Bay often use social network, such as Facebook and Twitter to spread stories of assaults. However, the author mentions some improvements, such as more control due to the installation of CCTV cameras and more funds have been assigned to the high education of the area.